While the public in the UK is largely divided about the upcoming in/out referendum on UK’s future in the EU, it seems that major newspapers in the UK have been working hard to decide on the outcome of the referendum and make the Leave scenario happen. New analysis of coverage of the EU referendum in the British national media published by the Press Gazette on 16 June 2016 revealed strong bias of the media towards the Leave campaign (Press Gazette, 2016).

The analysis was conducted on traditional British national newspapers, and it encompassed analysis of front page headlines. The researchers looked whether the national media favour any of the two campaigns, or neither. According to the results, 46% of the headlines favoured one of the campaigns with 36% favouring the Leave as opposed to 10% favouring the Remain campaign. However, when this 46% of the coverage that contains positive tone for either Leave or Remain campaigns is analysed separately, it appears that “the apparent bias is even more stark. Some 74 per cent favoured Leave versus 24 per cent Remain (when the figures are weighted to reflect circulation)”.

What is particularly striking is that the newspapers with the highest circulation are both favouring Leave campaign, i.e. the Daily Mail and the Sun. Nevertheless, “some 15 out of the last 22 Daily Mail front pages have favoured the Leave campaign, with none favouring Remain. And 12 Sun front pages have carried stories favouring Leave versus one which favoured Remain.” On the other hand, newspapers more leaning towards the left such as the Guardian published more articles in favour of the Remain campaign, while The Times and the i have published an equal number of stories on their cover pages that favour either Leave or the Remain campaign. 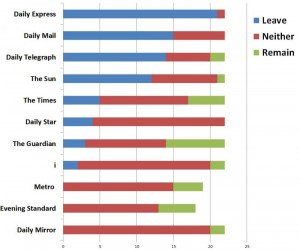 There is also no question that failing to do the above is seen as some form of bias. According to Entman (2007, p. 163), the term media bias “seems to take on three major meanings. Sometimes, it is applied to news that purportedly distorts or falsifies reality (distortion bias), sometimes to news that favors one side rather than providing equivalent treatment to both sides in a political conflict (content bias), and sometimes to the motivations and mindsets of journalists who allegedly produce the biased content (decision-making bias).

On the other hand, when it comes to the role of a journalist National Union of Journalists (NUJ) has a conduct that defines journalist as a person who, among others, “at all times upholds and defends the principle of media freedom, the right of freedom of expression and the right of the public to be informed”, “strives to ensure that information disseminated is honestly conveyed, accurate and fair”, and “does her/his utmost to correct harmful inaccuracies” (NUJ Code of Conduct).

When we look at only these characteristics of a journalist, it is rather difficult to argue that journalists in the British press media meet these requirements given their apparent bias in the coverage of the EU referendum. In addition, if we use Entman’s classification of bias the UK media can fall in any of the Entman’s categories of bias depending on the media outlet. As media have always been seen as the fourth estate this presents quite a worrying trend and brings a question of whether we are heading towards the future in which we will be absolutely unable to trust anything the media say. If this happens, this will inevitably play into the hands of politicians, some of whom primarily seek to protect their own interest rather than the interests of the country they serve. By publishing so much biased coverage on the British EU referendum, the media have not only failed to inform the public about the EU in a manner that will help the public make an informed decision, but they have also failed their own code of conduct and the profession as a whole.

The Reuters Institute for the Study of Journalism (2016). Press release: Study shows that majority of press coverage in EU referendum campaign was heavily skewed in favour of Brexit in first two months of campaign. Available at: http://reutersinstitute.politics.ox.ac.uk/sites/default/files/Press%20release%20-%20EU%20Referendum%20media%20coverage.pdf (Accessed 16 June 2016)