Until the last year, those of us who are still attached to more traditional media while embracing new technologies, had a hope that the traditional media are not losing battle with the new media. For example, since 2005 Ofcom reports were systematically showing that the TV would be most missed media if it was not available anymore (Ofcom, 2015). However, this year Ofcom published new report and it appears that the most missed media would be a mobile phone (Ofcom, 2016).

This information is interesting not just because it confirms what has been debated for a while now (i.e. that the new media are taking over the traditional media), but because of something else. For example, the agenda setting theory has been systematically confirming that the newspapers still set the national agenda and not the TV (even if they are now having more readers on their editions online than in print).

Nevertheless, when the newspapers set the agenda, only then the agenda/issue enters the TV and becomes more exposed and social media merely report and share the content of the traditional newspaper media organisations (Figenschou et al 2015; McCombs 2014; 2004; McCombs et al 2011; Asur et al 2011). This new change might also mean that agenda setting function of the newspapers will increase further if people turn to consuming media content via mobile phones. As we know, many traditional newspapers now have strong online editions with downloadable apps for easier reading and with this, their reach is increasing. Nevertheless, “many of the popular news sites on the Internet are subsidiaries of traditional media, the online versions of newspapers, magazines, television networks, and cable TV news channels” (McCombs, 2005, p. 545).

While the question on the future of TV is generally not new because scholars in many countries have been debating it for a while now, what is new is the change in the UK. The UK has been persistently attached to the TV to an extent that BBC and ITV journalists were scoring very high on the national list of trusted individuals (YouGov Poll, 2011), and the TV was generally seen as the most influential media in the UK, especially because of still high trust in BBC (Sherwin, 2016).

However, this has all started to change in the last few years. Even before Ofcom published these new results, YouGov poll (2014) revealed that Britons trust Wikipedia more than any traditional media, albeit BBC and ITV journalists again scored the highest of all other journalists. 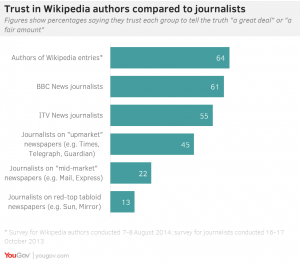 Nevertheless, the polls also revealed that while people used to score TV journalists very high on the list of trust they now trust more their hairdressers to tell the truth. For example, public poll from IPSOS MORI (2015) revealed that Britons still trust their GPs the most, but it also showed decrease in trust in the media professionals and TV journalists in particular.

This presents a further decline in trust to the British media as a poll by the same source in 2013 had TV presenters on the fifth place (IPSOS Mori Poll, 2013).

All these new findings therefore truly open a question on the future of the TV and the notion of trust. If the TV will lose popularity in the UK who will take over? Internet TV or some other media, i.e. online version of traditional newspapers? Which ones?

This question is particularly pertinent given the fact the view of the British public that social media are not trustworthy to the same extent as traditional media (Edelman Trust Barometer, 2016). If this view remains and the public shifts towards using the mobile phone for consuming media content, this can bring a significant rise in influence of the traditional newspapers often privately owned and not obliged to serve the public interest like BBC. If BBC’ news portal fails to catch up with online editions of traditional newspapers, the situation in the British media landscape can significantly change and only time will show what these changes will bring and what agendas will be set via online media that will, in the case of the further decrease of consumption of the TV, will be able to reach audiences without the help of the TV. One thing is for sure, the TV in the UK needs to change something or they will be fully replaced by on-demand TV such as Now TV, Amazon Prime, Netflix, etc.

Ofcom (2016). Adult’s Media Use and Attitudes Report 2016. Available at: http://stakeholders.ofcom.org.uk/binaries/research/media-literacy/adults-literacy-2016/2016-Adults-media-use-and-attitudes.pdf (Accessed 11 May 2016)

Ofcom (2015). Adult’s Media Use and Attitudes Report 2015. Available at: http://stakeholders.ofcom.org.uk/binaries/research/media-literacy/media-lit-10years/2015_Adults_media_use_and_attitudes_report.pdf (Accessed 11 May 2016)

Sherwin, A. (2016). Public trusts BBC more than their family – but doesn’t trust Government with the corporation, poll finds. The Independent, 10 March. Available at: http://www.independent.co.uk/news/media/public-trusts-bbc-more-than-their-family-but-doesn-t-trust-government-with-the-corporation-poll-a6921606.html (Accessed 11 May 2016).