This series arrived on Netflix in September but I did not notice it until last night. Interestingly, both seasons arrived at the same time and even though this is Netflix’s original series we are not watching it on a weekly basis like Star Trek or Riverdale.

I knew instantly it would be fun, I was only not sure about the quality of acting as recent fun sometimes also means overacting. This is not the case here, as the acting is normal and up to standard while the series is really funny. However, the series is much more than just entertainment.

Elleanor Shellstrop (Kristen Bell) opens her eyes and finds herself in an office speaking with Michael (Ted Danson). He explains to her that she is dead and that she came to the good place, as opposed to the bad place where nobody wants to be. He shows her around and explains how magnificently the good place works. Everyone gets a soulmate assigned and she admits to her soulmate her confusion and asks for help. This is because she does not belong to the good place as she was not a good person back on Earth. Not only she was not a good person but she was intentionally bad and did not even care about it, i.e. ditching her friends for a guy and not giving them a lift home even though she promised to do so, selling fake drugs to old and vulnerable people in a very cheerful way and enjoying what she’s doing, assaulting a guy who campaigns for protection of the environment, etc.

The series has comical elements such as trash falling from the sky when she ditches the duty of cleaning and simply hides the trash instead of taking it to bins, and similar. However, wrapped in the humour and entertainment there lies a whole set of very serious questions starting from religion all the way to ethics and morals. Thus, Michael tells Eleanor that every religion got about five per cent correct about life after death but he also goes forward and explains to her how are people selected for the good place.

It turns out there is a careful calculation of all person’s actions and everything counts towards a final score, which determines where the person will end up with. Some of the things that are taken into calculation are what we on Earth would perceive as trivial, but all actions add up. Some things that are taken into consideration are exaggerated and meant to be funny, but check some other stuff on the snapshot below and you will see that ending slavery gives +814474.80 while committing a genocide will result with -434666.90 and thus the latter is likely to result with residence in the bad place rather than in the good place. 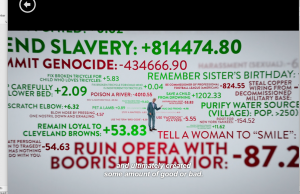 Basically, the series is telling us that everything we do matters. In addition, a reading list could be compiled from Chidi’s (William Jackson Harper) teaching of Eleanor on how to be a good person as he gives her literature on ethics and moral to read. Some ethical teaching also found its way to the series and thus the series is actually very well researched. This type of series is the most persuasive way of pushing people towards thinking about the meaning of life and how they should live because the series tackles some very important questions and yet they are wrapped up in entertainment and humour.

Oh yes, and did I forget to mention that all artists and politicians are in the bad place? 🙂