This is a new film from F.C. Rabbath and the film is not out yet (scheduled for October this year for the US audience). I’ve got it from the director himself and watched it immediately given the fact I loved his film Listen, which remains a film hard to beat when it comes to my rating because I absolutely loved it. 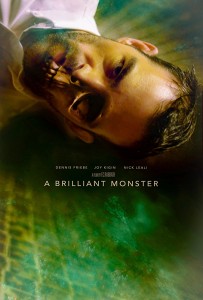 I do not have a trailer for this new film yet, but I will update it once the trailer becomes officially available.

In this film, Mitch Stockridge (Dennis Friebe) is a rising star who authored several inspirational books. However, he is also a monster and a murderer, and we get to know this right from the beginning of the film. The reason for being a monster, as his girlfriend Sophie (Alea Figureoa) explains, lies in Mitch’s childhood. Luke (Jason Fusco) abused Mitch when they were children, and as if that was not enough Mitch was also abused by his father who up to the present day does not acknowledge his success or appreciates the fact Mitch is looking out for him.

However, Mitch is not a murderer who simply looks for victims, but someone who feeds the monster to get stories for his successful books. Thus, he commits many murders including childhood bully Luke who publicly bullied and humiliated him, an event that Mitch sees in his head many times throughout the film.

This however brings another question and this is what the film tries to tackle. In other words, the film tackles the ultimate question that every writer or an artist often hears, i.e. “where do you get your ideas from?” This is the question Mitch often gets, and the one he clearly hates (for obvious reasons). He hates this question so much that he even snaps at a 14-year-old girl when she insists to understand where his ideas come from.

While it is true that many people had traumatic childhood full of bullying and never ending bullying of parents who lack any affection towards their children and who quite frankly shouldn’t be parents; it is also true that many of those bullied people carry abuse in their adult age. Some because it continues (e.g. with toxic parents who never have anything nice to say), and some because they simply can’t let the trauma go. Sociology and psychology are in large part built on studies that investigate these important issues.

But, this film is also about the fact that a monster can be anyone and not just people whom experienced bullying as children. It is enough for one traumatic event to happen to trigger a monster. This film thus shows that monster can be anyone, i.e. not just traumatised Mitch who is looking out for his father even though he does not support him or appreciate his efforts, but also allegedly decent people who judge Mitch only to become monsters themselves…

This is a dark film with depressing atmosphere but it captures the attention of the viewer because of its story. In addition, the film does not seek to create a Hollywood type of excitement by not showing us whether Mitch actually killed or not. We know right from the beginning who the murderer is, and we wait to see how the film ends and whether he gets busted. Meanwhile, we see a psychological state of a monster as well as denial of being one for people are indeed not always aware of their actions. Nevertheless, they desperately try to see what they want to see but they do not always see themselves and a monster they carry within…

The film is worth watching for sure, and while you wait for an official release catch up with ‘Listen’ if you missed it.